BBC’s Top Gear came to the CCM factory in October 2021 to film the moving tribute to legendary stunt man Eddie Kidd.  This stunning CCM is the bike that was seen flying high above 13 x London Routemaster buses, with one of Britain’s greatest ever stuntmen taking it into the world record books. 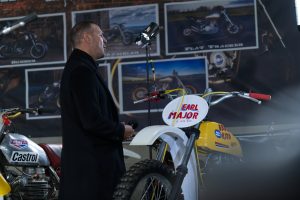 Eddie was just 12 years old when he saw a movie about American stuntman, Evel Knievel, which inspired him to jump over 11 of his schoolmates on his bicycle! He got his very first motorcycle at the age of 15, and his love of stunt-jumping won him a junior world record. He cleared eight buses and this early success would set him on a path to greater things.

He joined stunt team, Cyclo Maniacs and in 1975 on board his CCM 500 Motocross bike, Eddie successfully cleared 13 x double-decker buses on ITV’s World Of Sport and the cameras recorded more than just a jump!

The adjacent golf club was concerned that Eddie would run on to damage their course and so attempted to stop the jump going ahead. The organisers reassured them by agreeing to have sheets placed at the end of the run off to catch the bike, just in case it was travelling too quickly.

As we now know, by the time Eddie had landed and was in control, he knew the bike wouldn’t stop in time and so tried to put the bike down to scrub off speed. He bowled over his dad and uncle, (who were holding flimsy bed sheets!) like skittles, and scattering them into the undergrowth! Eddie was relatively unscathed but his dad suffered broken legs as a result. Health and safety was very much in development back then! This didn’t harm his career as immediately after the jump, Eddie would be snapped up by Yamaha.

Eddie soon became a household name and would go on to double for Harrison Ford, Pierce Brosnan and Michael Caine to name just a few great movie stars, with Hollywood film and TV productions employing his motorcycle and driving skills. He was versatile too, his handsome, masculine looks helping to garner successful modelling and music careers.

In 1993, in front of a 60,000 strong crowd, Eddie jumped the Great Wall of China, however just 3 years later, his career would end dramatically. It was at The Bulldog Bash that Eddie made what appeared a relatively easy jump against the advice of his mechanics. He landed hard, his head hitting the tank leaving him as an unconscious passenger and he was thrown down a 20-foot drop, leaving him with injuries to his pelvis, spine and tragically, his brain.

Eddie was in a coma for three months and was left paralysed requiring round the clock care and physiotherapy. Determined not to be defined by his injuries, Eddie took on the London Marathon Course in 2011. It took him over a period of 2 months to complete but he did it, such is his strength of character.

Eddie’s CCM bike was part of a barn find, where this and the rest of Bert Dearman, the Cyclo Maniac team owner’s motorcycles were locked away after Eddie’s successor, a young enthusiastic rider, was tragically killed attempting another daring jump.

Many years later, CCM were alerted to the existence of the bike and it was brought back to Bolton and lovingly restored to its original condition, where it remains on show in the company’s boardroom. 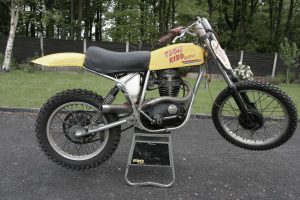 The 500cc bike was manufactured on the 10th August 1976 for the Cyclo Maniacs team. The suspension had extra long travel (for those days!) and featured a Quaife 4-speed conversion. The bike had a number of adaptations such as extra footpegs and extended rear brake to allow Eddie to perform some of his stunts.

Top Gear’s tribute was incredibly moving, many citing it as the shows best ever feature! Paddy McGuinness showed a rare sensitive side to his character with contributions from friends and family, excerpts from some of his greatest stunts and some truly beautiful footage of Eddie in a spectacular finale.

If you haven’t seen it, you can find it on the BBC iPlayer….and get the hankies at the ready!

You can see Eddie’s record breaking CCM on our stand at this years Motorcycle Live from 4th to 12th December at Birmingham’s NEC.